I've just been on the longest adventure!

Liverpool on a Friday was a slight anti-climax alongside the previous three days - the DJs have well and truly taken over, and I had to go elsewhere than the clubs to find some stimulation.

I've not really said too much about the course so far, I've focused on the music. But, now that I've had such a cool day, I want to tell you a bit about it! 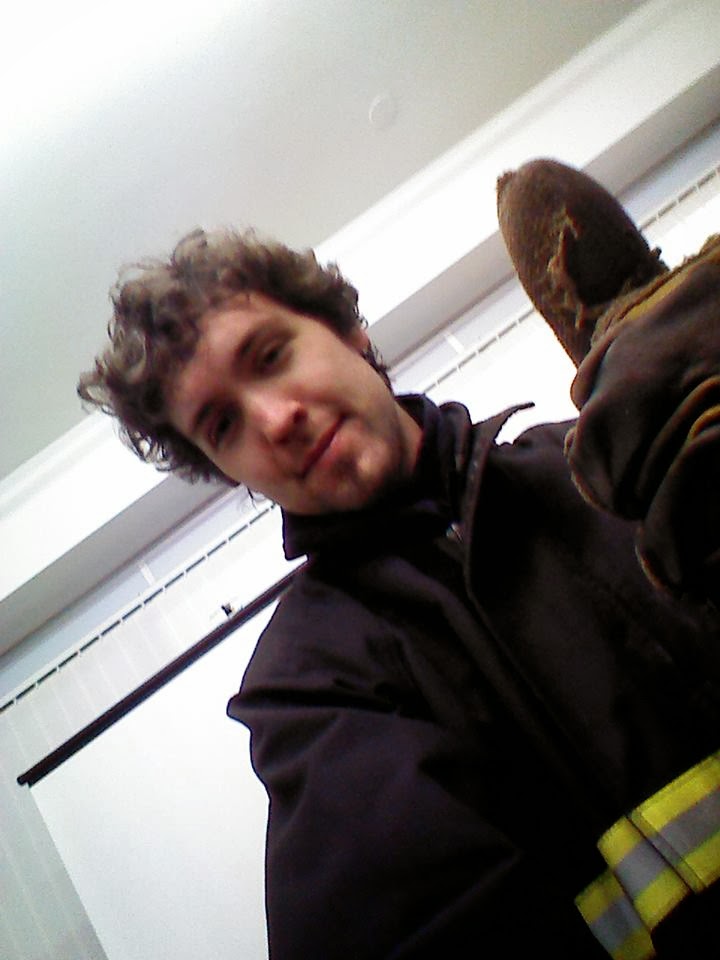 I look pretty rough here, because I was feeling it. Still, I loved the fire-fighting - climbing through a ship made of old shipping containers, pitch black and full of thick pungent smoke, using our new skills to find doors, climb down stairs and rescue dummies. Before we rescued our dummies, we had to douse this massive fire with this crazy heavy fire hose. It was hot, smoky and ridiculously cool!

My course-mates are mostly cabaret dancers from a different cruise, and are already thick as thieves, and always up to mischief. If I can find some of the brilliant videos they made I'll put them up, I think I'm in one.

Our instructors are brilliant fun, and make it all pretty bearable, even the massive amounts of theory. Still, I need it to be on ship! I've been watching the documentary on the sinking of the Costa Concordia, and it's made me realise I have a genuine responsibility to be s**t hot at this stuff! One of the chaps there is an elderly sailor, who's clearly seen the whole world, and tried extremely unsuccessfully to chat up the pretty dancers with his 'Monkey's Fists'.

After a good long snooze, I hit the city again. No open mics listed for friday, so I head out to re-visit the garden bar, which is either shut or full. I walk around the area, checking out all the Seel street bars that were so enticing on a thursday night. Yep, the DJs had invaded, and the music was a loud bassy mush that I didn't want to have to deal with. Even Heebee's had succumbed.

So, I walked down the street and heard the second busker I'd heard that night, 'Brown Eyed Girl'. I waited about, and had a chat. His name was Tom George - here he is being photo-bombed by a government ninja. 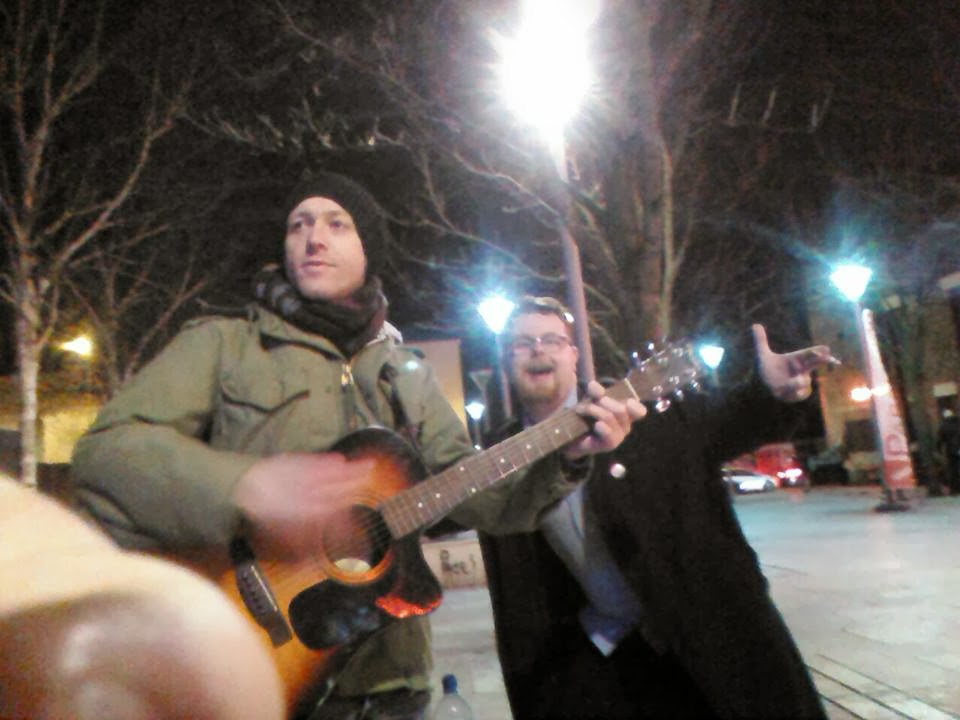 The ninja asked for a song, and Tom played a beautiful version of Bob Marley's 'Is This Love?'. I asked him if busking needed a licence in Liverpool and he told me no, they'd tried to introduce a busking licence to the city, but the musicians had participated in mass civil disobedience and forced their council to re-evaluate. I fell a litte more in love with Liverpool. This photo was taken feet away from the tumbled down theatre, or cinema I photographed in the previous blog post.

I asked Tom if he wrote his own music and if I could include him in my blog - turns out his songs are really great! See what you think:

After meeting Tom, I set out to find something new that I hadn't seen on a previous night. I ended up in Chinatown, walking through a giant oriental gate, into a beautifully colourful street. A blank eyed begger asked me for some change, holding a Styrofoam cup, just like the one's I've been drinking coffee from. This knocked me for six considering the song I'd being singing in my head as I walked

'He dropped a coin into the cup of the blind man at the gate - Blame it on a simple twist of fate.'

I dropped a couple of quid into his cup in respect of this little glint of Dylan. It occurred to me how much more respect I have for buskers and beggars than I do for regular people. If there's real heroes in this world it's the people who take their chances in the chill of the night.

I found myself in some residential area, and I began to feel like my journey into the unknown was becoming a little foolhardy, as I didn't know where I was. Then I recognised the Pilgrim's Progress antiques and the shell of the warehouse, so I swung down a street I knew would take me to the waterfront. Faceless, nameless clubs in the back alleys were buzzing with raves, and I was sorely tempted to blag my way into one of these. I wasn't sure if they were private, illegal, or just unbranded, but I knew I'd never make it to the course the next morning, and that I'd probably loose my Moroccan Leather bag, and my G-pad. I feel like I need a good rave though! 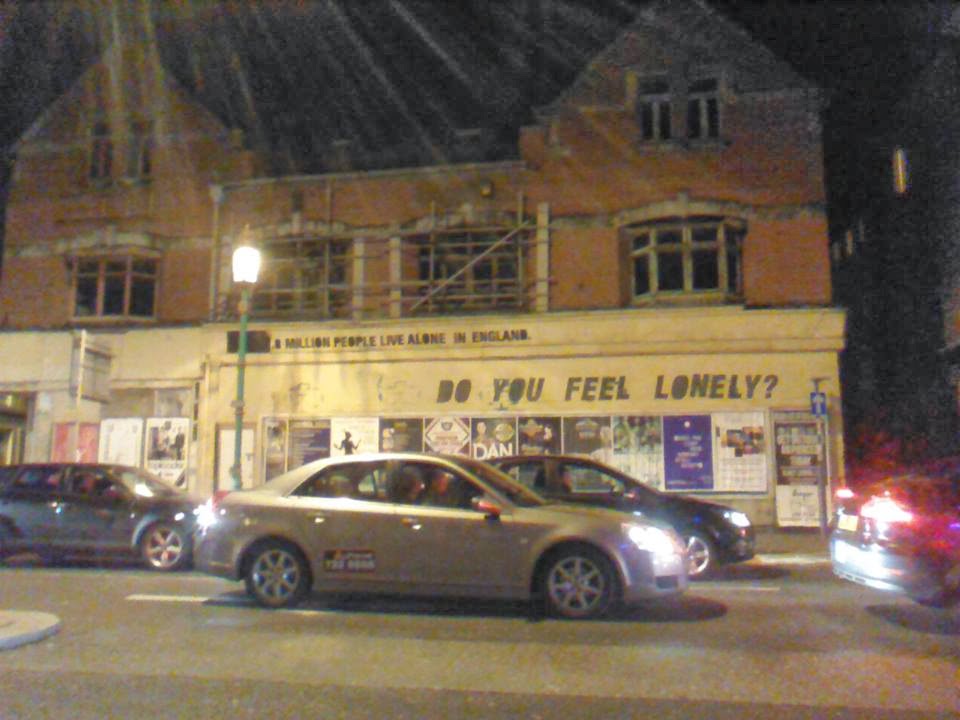 Yes, I did feel lonely. And yes it did feel like this shop was put here just for me. It was the first time I'd felt insecure in this beautiful city, but it was like it understood and offered me comfort, if not solutions.

In ended up going into Maccies to just have some warmth really. I got a burger, and immediately felt like a sell out, sitting in the friendly happy sickly environment, as lonely and impersonal as it could possibly be.

As I sat in an big awkwardly green winged swivel chair and bit into my beef-circle, I suddenly felt very bleak and empty. I had a very strong desire to meet a woman and make love to her, it being the only real thing left in the world. It went pretty quickly and I finished my cheesey meat-bundle and went on my way.

I went through a giant shopping complex to escape the Albert Docks where Grace and I had been together last year. It was pretty beautiful, but it really did feel like a Parthenon to the mundane. Nothing about it couldn't be bought and purchased with several different brands of credit card from any city in the country. It didn't feel very Liverpool - it wasn't gruff, sturdily constructed and crumbling like the hands of an old sailor. Just polished steel and shiny.

The other night a kid came into McDonalds having a panic attack. The girl behind the counter gave him a bag to breath into, and he spoke in raspy unintelligible breaths. He spun round and headed back out, but before he did he grabbed me and said 'Havasee -yafav?'
'I'm sorry?' I asked.
'Have you seen a black iPhone five?' I got second or third time round.
'Nah mate, I'm sorry'. The kid ran off, asking everyone he saw, like his life would snuff from existence without fingerprint recognition on his phone calls.

You're better off without it, I thought to myself.
Posted by Sam Harrison Music at 19:30