We Spent the next day of tour driving through Wales - beautiful Wales! A lot of it was boring A roads, but eventually we got to some amazing countryside! We stopped off at this beautiful place to get out bearings and I decided to climb on top of the van. 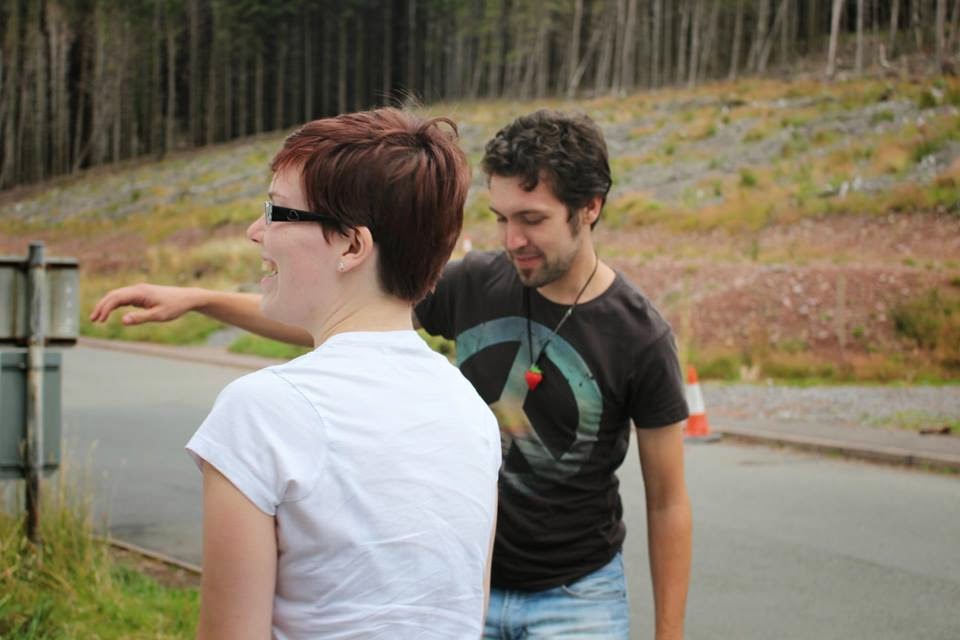 Later on we arrived in Cardiff and started looking for the bar. We were running pretty late, and when we parked up I found I had a text from my friends Sophia and Catherine who I'd met when I was playing on the cruise ship Thomson Majesty. They were at the bar waiting to meet with us!

We dashed out into the torrential rain, not really sure where to find the bar, but we trudged on and suddenly we were there! We even found an umbrella on the way, which has hung in my van ever since for just such emergencies...

When we got to Genevieve's Open Mic at Porter's, Cardiff, Sophia and Catherine were waiting for us, and we proceeded to have an amazing night. Not only were the standards of music awesome, but the bar was incredible. It had it's own cinema, and a front room with a giant record collection for the bar goers to listen to! Check it out... 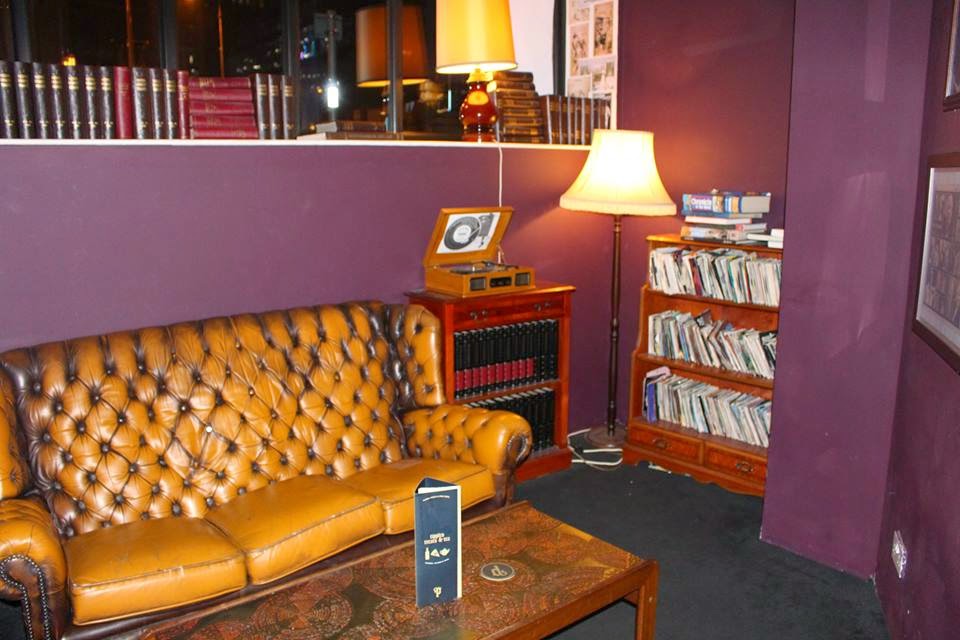 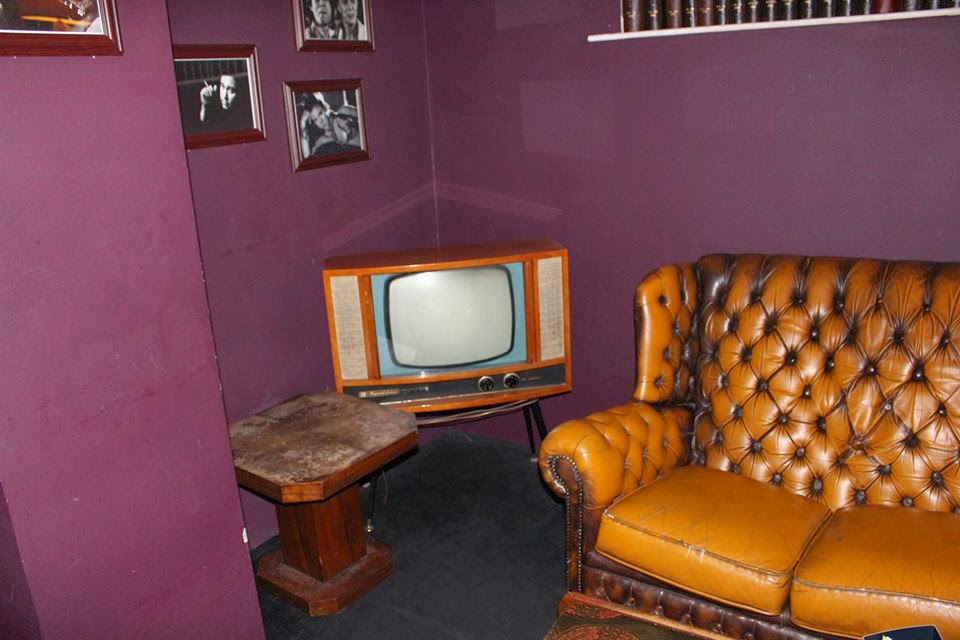 When I got on stage I was right at the end of the night, and I got to play four songs, including the début of a song never played before called 'Writers of Rhyme'. It'll be online with a video in the next few days, so I'll post it at the bottom when I've made it. 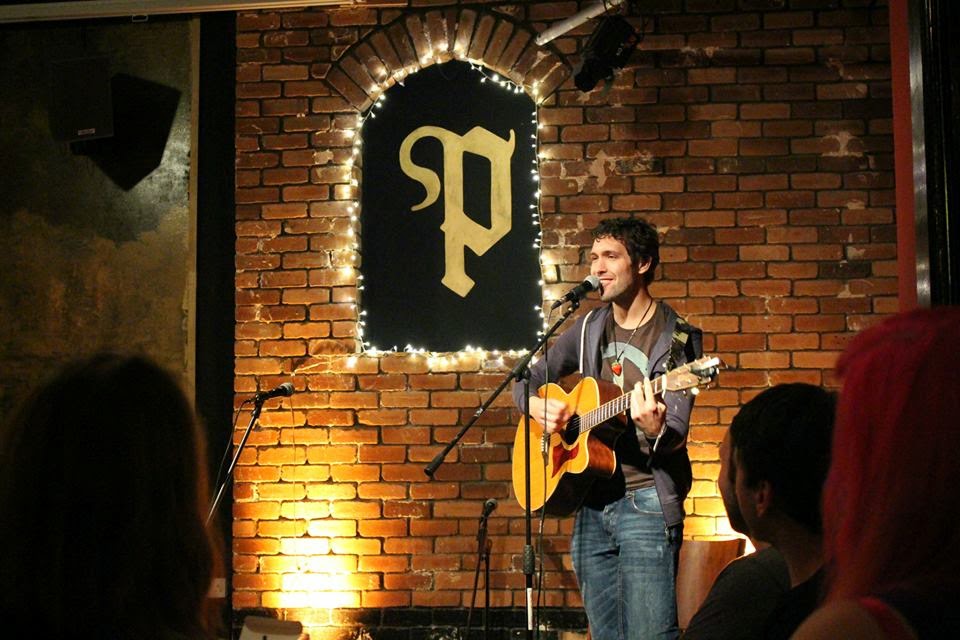 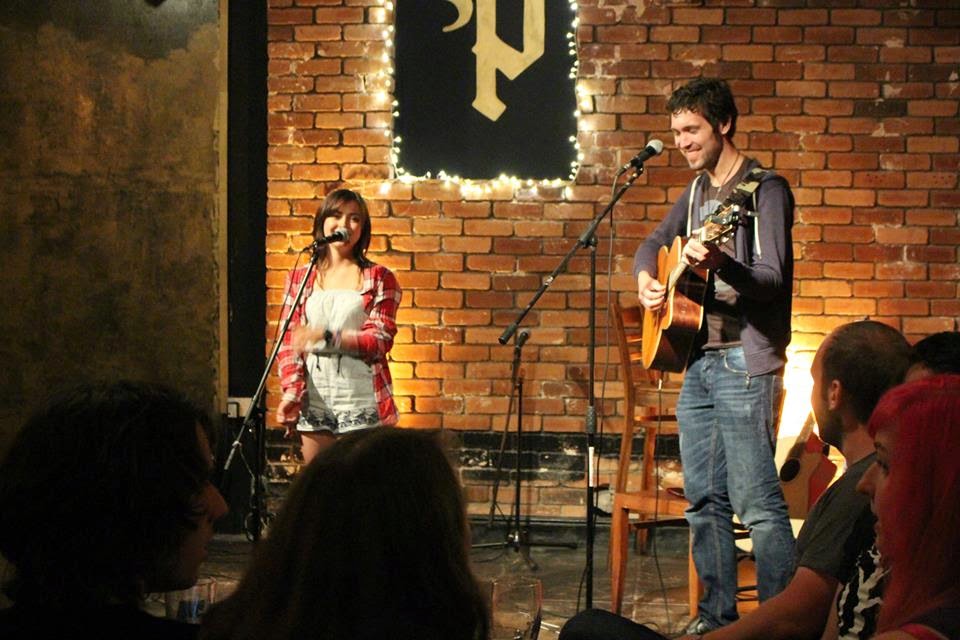 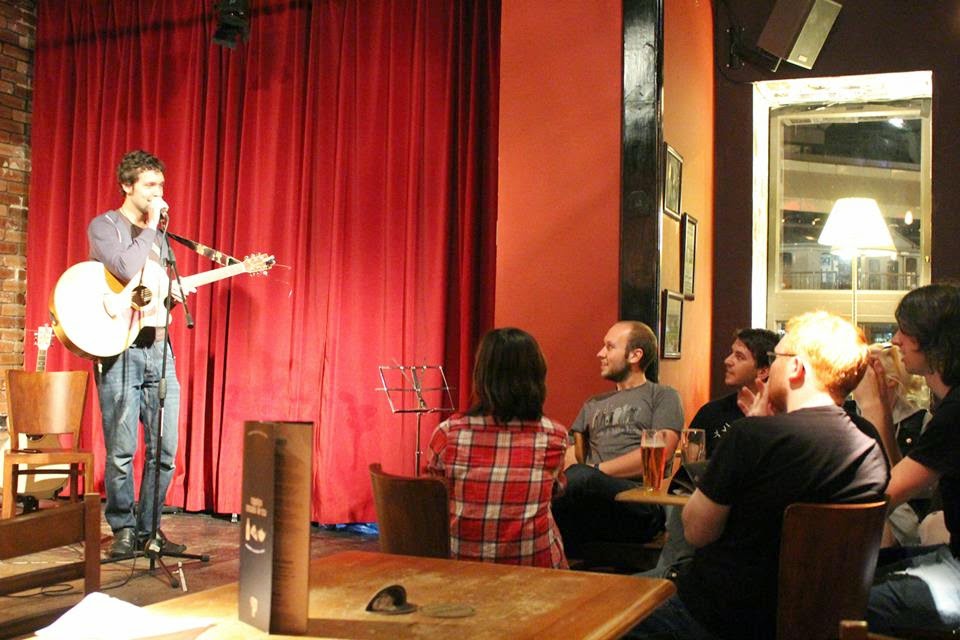 Afterwards I used my normal method of letting people have CDs and records for free, but asking for a donation. This works sometimes, and doesn't others. Normally even if people don't give so much, it covers pressing costs. The great thing is, at Porter's the audience were so generous it covered our journey all across Wales! Much love to everyone who was there on that wicked night :-) x

So, that's the official verdict. Genevieve's Open Mic - give it a visit. It was totally worth the trip!
Posted by Sam Harrison Music at 14:34 No comments:

Woke up in Sheffield, Laurel and I went into town before we split. We took some photos with the giant metal balls pictured below and did some shopping. I found two records - one called 'music to bathe by' with nude women swimming in a pond on the cover (featuring Johnny Cash's 'If I Were A Carpenter') and No Tomorrow by Orson (on vinyl - who'da thunk?). 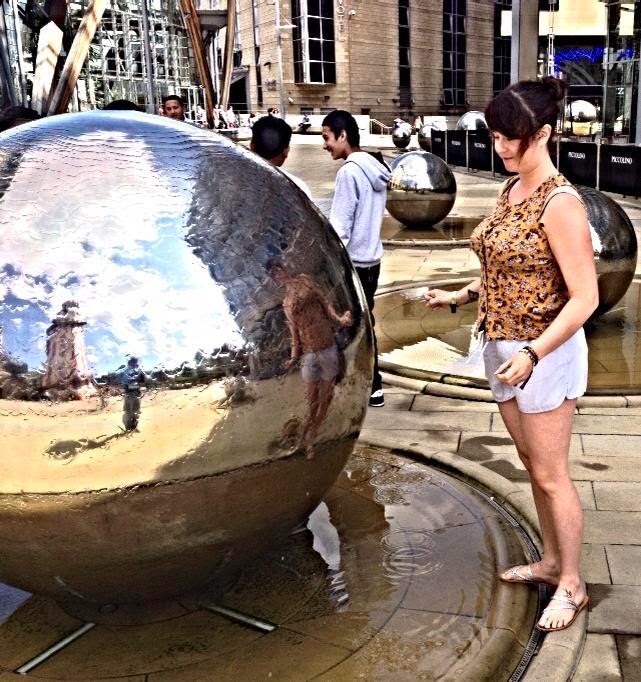 Then Laurel headed back home and I headed onto Liverpool down the A57 through the Peak District. I pulled over in a layby, met a sheep and cooked some Tortellini.

When we got to Liverpool, Georgie, Jeng and I hit the town for the next gig of the tour, returning to Hannah's Bar and Ogo's open mic. It was a great night but we bailed pretty early for an early start to Cardiff - here's some pics! 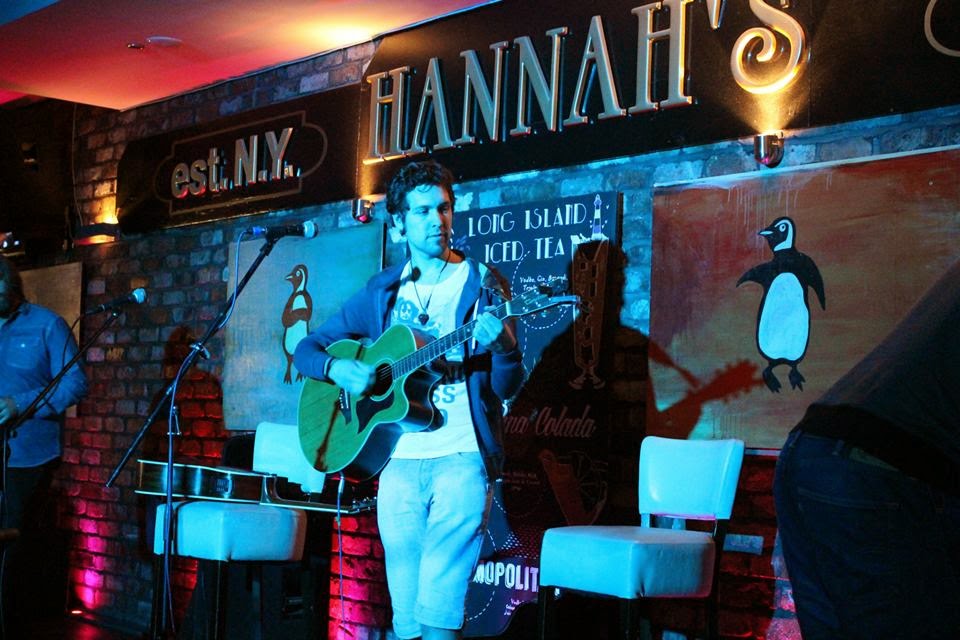 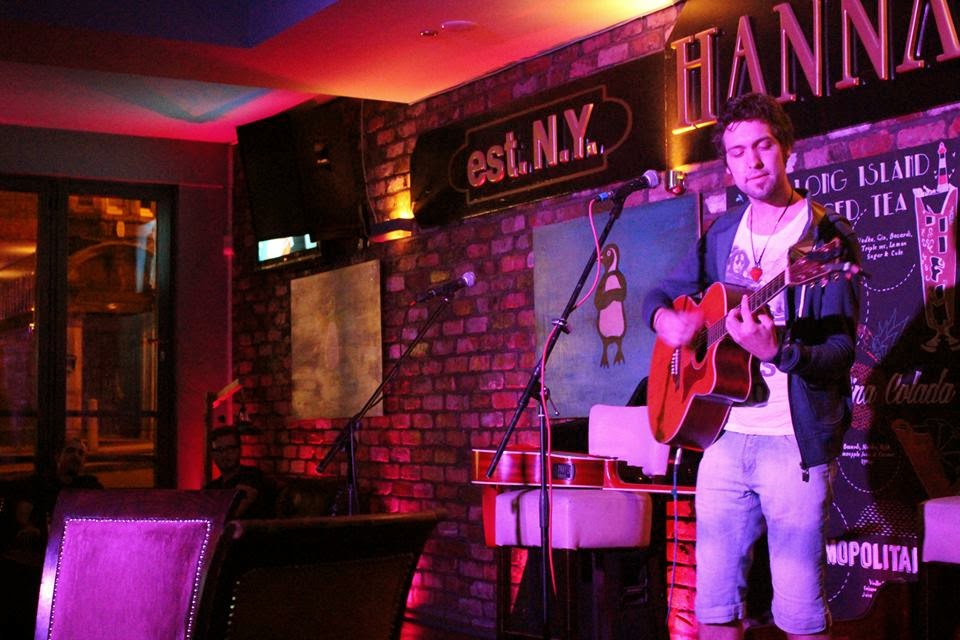 We stayed in Birkenhead for another night, then headed out to Cardiff the next day. Pics soon!
Posted by Sam Harrison Music at 05:27 No comments: 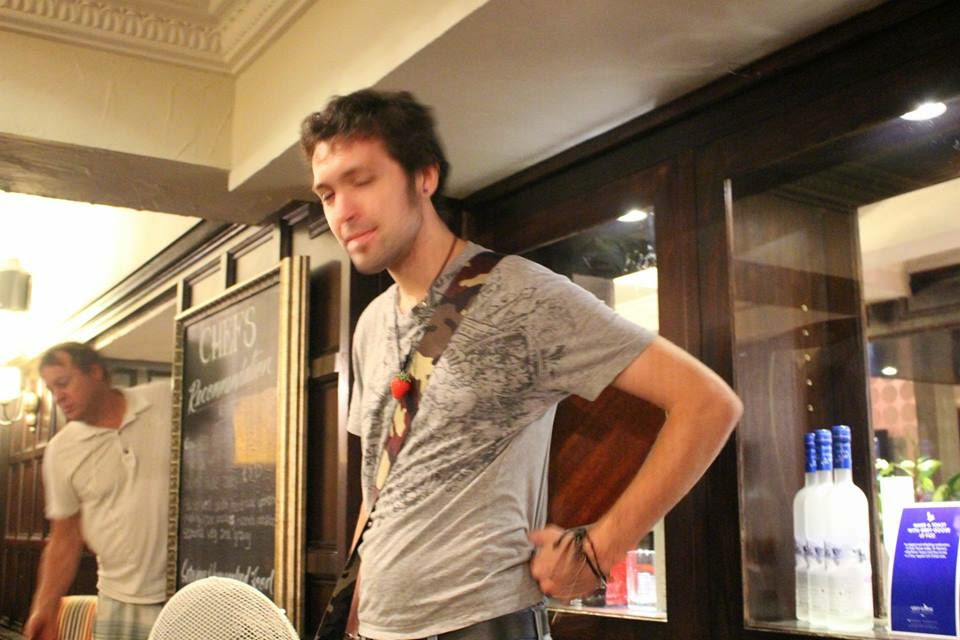 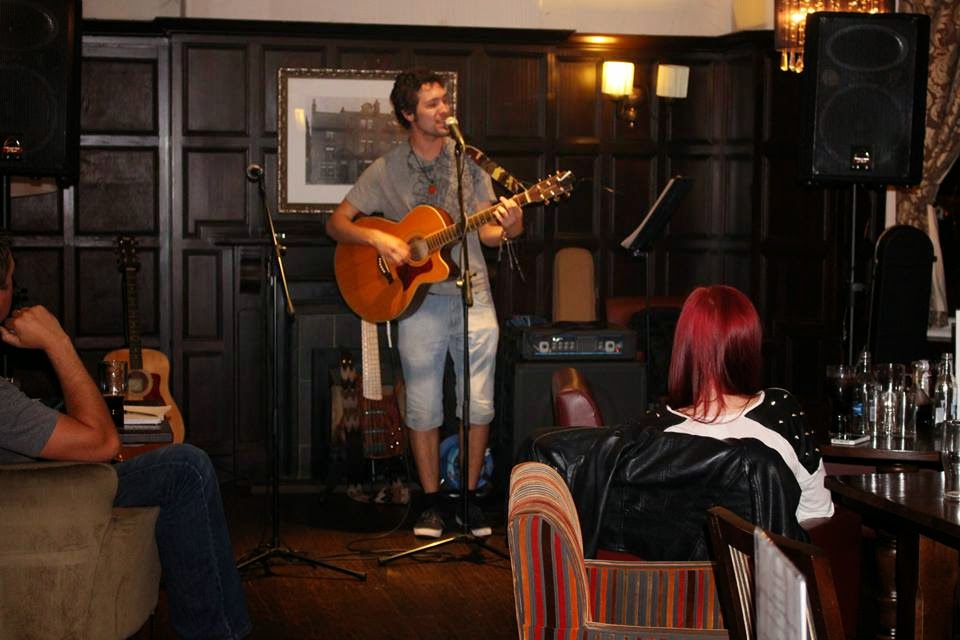 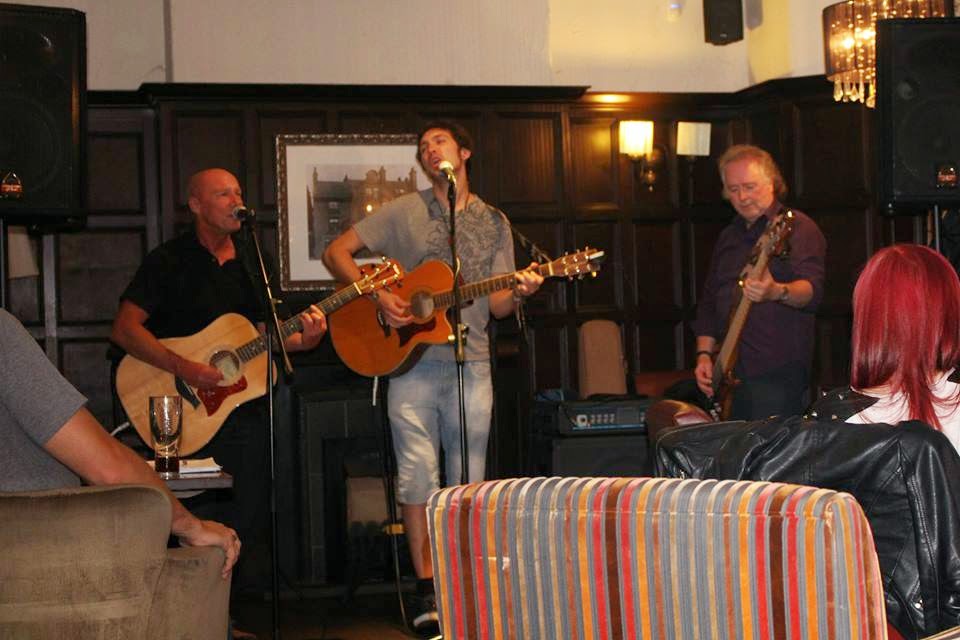 I wish I could go into further detail about the acts here, but I'm awful with names, and I'd sooner not leave anyone out. I do however remember an incredible country duo with the sweetest vocal harmonies. They really blew me away, along with the high standards of the whole night. Millhouses, Sheffield folks - a real pub with real music :-)
Posted by Sam Harrison Music at 19:00 No comments:

Moving house for our friends gave us an excellent excuse to play in Liverpool again – Moral Laurel and I headed down in Molly the van armed with a guitar and plenty of booze money. We rode through the Mersey Tunnel into Birkenhead where Georgie and Jeng were putting us up, then caught the train into Liverpool James St. to meet them.

We rolled on into Heebee Jeebies on Seel St. for their Thursday open mic – this is the second time I’ve played this bar and I’ve really enjoyed both nights. One or two of the regulars recognised me, which made me pretty chuffed and put me in a good mood for the set. The atmosphere was great and a whole chain of cracking acts took to the stage, including a guy who sounded like Tom Waits. Love a bit of that!

I took a bit of a risk by opening with 'Price Tag' by Jessie J – the bar was what my Mum would refer to as 'trendy' – i.e. Indie, dark and low lit – very un-poppy. Still, Liverpool's inherent friendliness shone as always, and everyone got involved and some sang along – no music snobbery here! I followed it up with my song 'Cheese on Toast', 'I Wanna Be Like You' and finished on a Johnny B. Goode jamming with the Heebees regulars. I bought a stack of CDs and Vinyl and managed to get rid of them all.

The liquor kept flowing – we started by teasing free shots out of an empty gay bar called 'Pink'. Then we headed to meet Dan, Suzie and Amy at some pub in Mathews Street which by this point some serious inebriation had prevented me from recalling the name of. Within a short time we were all dancing like maniacs on a little stage, where the locals were joining us for a sozzled tumble. From this pub we went to another and watched a band absolutely blow the place away. They were called JC and the Two Steps and had a residency at one of the clubs. They were tight as a ducks arse and the crowd went mad for it. I have a vague memory of a gay bar called 'Superstar Boudoir', with drag queens and some really eclectic songs that were meant to be classics, but they were completely fresh to my ears. We then headed back to Birkenhead, where Laurel went to sleep and I lap danced a pot plant.

Posted by Sam Harrison Music at 05:23 No comments: