OK, so the adventure continues...

For some mad reason I decided it was a good idea to blow a whole load of money on playing an unpaid gig at the other side of the country, in the upstairs room of a pub at 8.30 in the evening. That reason was because the pub was the Hawley Arms of Camden, the famous stomping ground of Amy Winehouse, Pete Doherty, Razorlight, Russell Brand, Noel Fielding and many others. I'm sorry for dropping all those names, but they were awfully heavy.

I caught the train down early, and spent most of my day lugging a guitar, a box of CDs and a bag of food around, damp but excited. I now know every inch of Camden market, and ate a giant portion of Bang Bang chicken, the single greatest foodstuff ever created by man and exclusive to Camden. If anyone's ever down there, check out Cyberdog. Even if rave isn't your thing, Cyberdog is the most exciting shop I've ever been in, with clothes in colours I didn't ever know existed, sculptures, burlesque dancers and even a neon-clad sex shop in the basement. It will make you re-evaluate your eyesight. Thanks to Hazel Marie for showing me round this amazing city last time I was down, otherwise I wouldn't know about this stuff! 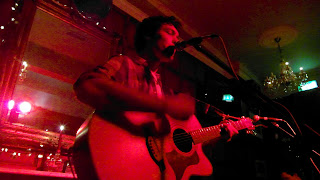 Playing to MTV - Who quite rightfully, were more interested in partying :-)

Anyway, the gig was packed. I wondered upstairs to find Glass City Vice, a brilliant young indie band from Brighton, setting up their gear. They would later play a blinding set, check out their stuff on youtube, they kick ass. I introduced myself and set about exploring the pub. The highlight for me was the graffiti on the overground bridge, which should be on YouTube soon, with some great gig footage. 'We miss you Amy', 'RIP Amy' it was beautiful to see the idol immortalised by the love of her fans. Soon after I met Katie Coleman and her band, who were unbelievable. I've not seen a singer with so much presence and control in a long long while. Katie was a great laugh too, and kept me company when my nerves kicked in, which were about ten times as harsh as I was playing an ALL ORIGINAL SET!!! AAAAARRRGGGH!!!!

The other artist who performed that night's name was Liam, but shamefully I've forgotten his sirname. I'll try and find out so I can link him here at a later date. He was also fantastic, with a brilliant guitar technique and a some really creative tunes. 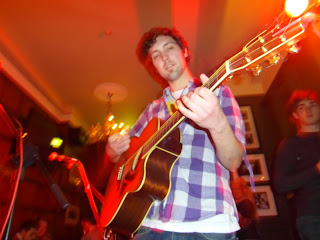 Soundcheck - sounds good! Less treble on the guitar - my mantra...

Eventually I met Adam, the promoter, who was a sound chap and gave me some really helpful feedback on the performance. I'm name checking him here for the sake of a hyperlink to Mada Music who look to be doing some great stuff, as well as managing Katie. One to keep an eye on for sure - I'm yet to check out their in house label :-)

So the GIG! The first crazy thing was that we were sharing the pub with a party from MTV! A member of their production staff was leaving, and had booked out the room above ours. I wouldn't say I bossed the set, but it wasn't crap and everyone was receptive. I gave away about fourteen CDs, if anyone from the gig wanted one and didn't get one, email me and I'll send you a zip of the files. I had some great feedback from the crowd, all positive. At least after screaming 'Sex Games' out nobody could fail to notice I was there :-p

The whole show was filmed by the real hero of the night, Aden Asquith, who's gone well out of his was to get some great quality, great sounding videos of the set. Also, thanks to Helen & Tim for coming down and being awesome support and great company! Aden also took the pictures I'm about to insert into this post. 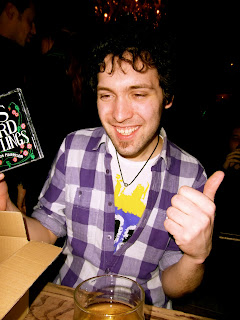 After the gig I caught the ten to midnight tube to Shepard's Bush Market, where I shivered my way to the front door of the second hero of tonight, Tori Longdon, choral singer, conductress and all around good egg. Oh, and the couch of whom I was to kip.

Tori was the perfect host as always, and I found I was actually sleeping in the same house as the bassist from Stornoway - well, its a small world! Sadly, it was too late for us to meet though. Roxy Hughes should check these out, at they're pretty darn cool!

Next day I visited the British Museum on the advice of Grace, who received bountiful cheap souvenirs for her superb advice. I spent most of my time there filming the faces of Greek sculptures, which I've decided are by far the most beautiful I've ever seen. I felt very arty and pretentious, which I now feely guilty for (thank-you Grace). My fave was definately Lely's Venus, which is designed to look beautiful from every angle, but never reveal her modesty.

After that I went to the Old China Hand in Farringdon with Tori for catch up time, and tasted one of the nicest ciders I've ever had. I also met some of her lovely collegues, who made me feel very welcome and ravaged some pineapple chunks. A train journey in the charming company of Lisbeth Sallander, the Girl With the Dragon Tattoo (its second reading now) culminated in a satisfactory snooze. This is surplus info and probably very boring.

The next day I had the most fun gig I've had in many months - the wonderful Victoria Pub up near the castle had one of the best crowds, so good I played for four hours and barely felt it. Thanks to all there who made me feel so welcome and got so stuck in!

Thanks also to Ciaran Grant, who went above and beyond to cover my open mic at the Golden Eagle. Thanks to Tracy and Pete also for being so supportive in the crazy but thoroughly worthwhile trip.

One last thing, check out Glass City Vice - if you like indie, you'll love GCV! I'm lookin at you Ciaran...

Thanks for reading peeps, I'll keep you posted!