I'm getting to grips with Liverpool.

I'm at a point now, where I know most of the major streets, and I can kind of join them up in my head. I can get a bit lost and find my way back to the hotel without panicking too much. The more I walk the streets, the more I feel at home, and I'm already gutted to be leaving this wonderfully stimulating place. Two more days, and so much to see! Btw, if my writing is all over the place I've had a few drinks.

I started off by trying to find the cavern, which the internet said had a Thursday night open mic going down. I didn't get my hopes up too much, but the idea of playing the Cavern really did get my heart racing. Internet was wrong - the Cavern PUB which is really just a pub with the cavern's name on it, bearing no relation to the club itself (which isn't the real Cavern Club anyway), hosts a Monday open mic, by which time I'll be gone. Yet again, the Cavern seemed like Liverpool's only slight disappointment.

So, Heebee Jeebies was the internet's second choice. I made my way down to Seel Street, immediately realising that this is the hub of Liverpool's best night-life. There maybe more, but Seel Street definitely got my antenna prickling.

Heebee's was amazing. To my eternal shame, I can't remember the names of the guys who hosted this night, but they were insanely lovely and hospitable, as I've found with all the Liverpudlians I've met. I've had a few drinks though, and the one person I can remember is Lauren Davenport, who's been on stage for a year, but has caught the bug, and wants to make performing her life. I missed her set with my Cavern confusion, but I got to see her play one song. Unfortunately, on this pic she's well blurry. 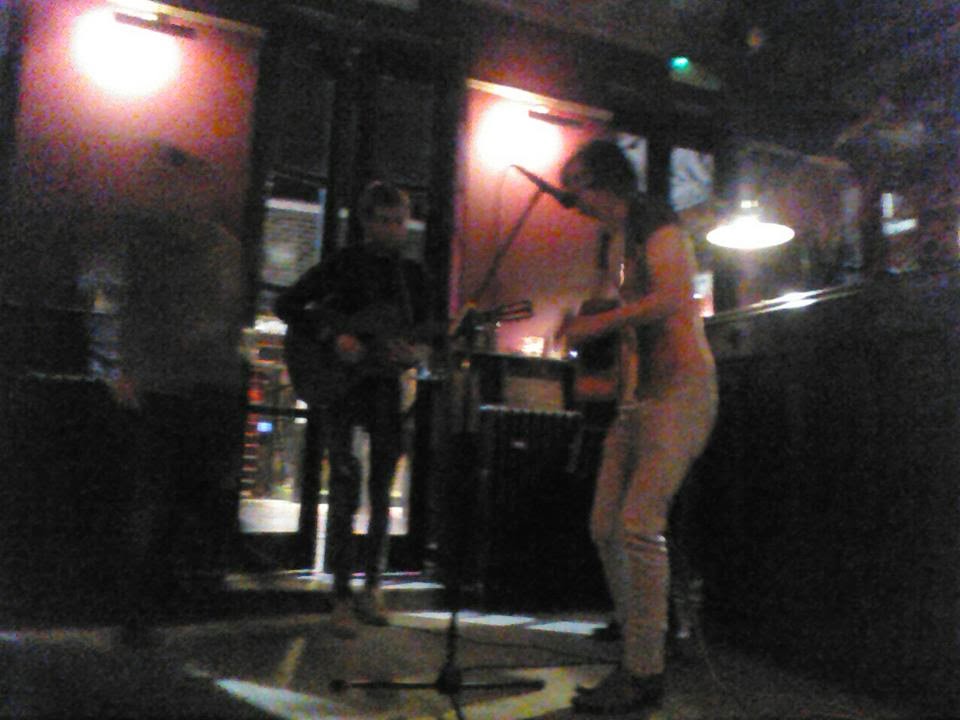 Anyhow, it Turns out Lauren is basically internet famous! Here's beautiful cover of Ellie Goulding's 'How Long Will I Love You?' which is seriously worth a listen - thirty odd thousand people agree! :-)


I want to say a little bit more about Liverpool, and how much I love it. Everywhere, on every street corner is a bar playing excellent live music. Everyone of these bars has all the equipment installed to provide free gigs, and musicians are top standard everywhere. All of the open mics I've been to, everyone has been warm, hospitable and not competitive. In fact, the whole of Liverpool seems to be welcoming, sociable, and they gravitate to strangers and take them under their wing. I've never been to a place before and felt at home as quickly. It's going to break my heart to leave.

This kind of friendlyness is not exclusive to music venues. In the streets, kids and students are huddled in embraces against the cold, smoking together, drinking and laughing. On Seel Street I passed a walled off garden, with a gate into it, and inside the most beautiful chillout bar. I was smitten! I decided on the way back from heebee's I would stop for a drink, but the doorman was closing up. 'Could I have a quick look round?' I asked him, 'I really wanted to see inside!'. Instead of being told where to shove it, he let me in and let me wonder round the beautiful garden, with a railway carriage bar inside.

There's no violence, or fear of it, anywhere I've been. In fact, all I've received have been hugs, kisses and facebook adds. Also a genuine interest in my music. In one bar, I started chatting to a guy who gave me a cheeky slap across the face, ever so gentle, as a chastisement for not having heard a Ben Howard song. The fact that he could do that to a stranger, without the fear of being punched into next week spoke volumes to me about the character of the city.

The other thing that struck me was the girls. Not only did everyone seem to be up for a drink and a dance, but there was no snobbishness or stand-offishness from the prettiest girls. In Lincoln, you can be readily snubbed for talking to a girl who considers herself to be above your station. In Liverpool, you can talk to anyone readily, and the great thing is that if you start chatting to a girl she doesn't immediately assume you're trying to get into her pants. I've made loads of friends from chatting in a city where I wasn't really interested in casual sex - it didn't seem to matter that there were no tongues in each others mouths, it just felt like open gender equality.

The other thing that makes Liverpool for me is the buildings: 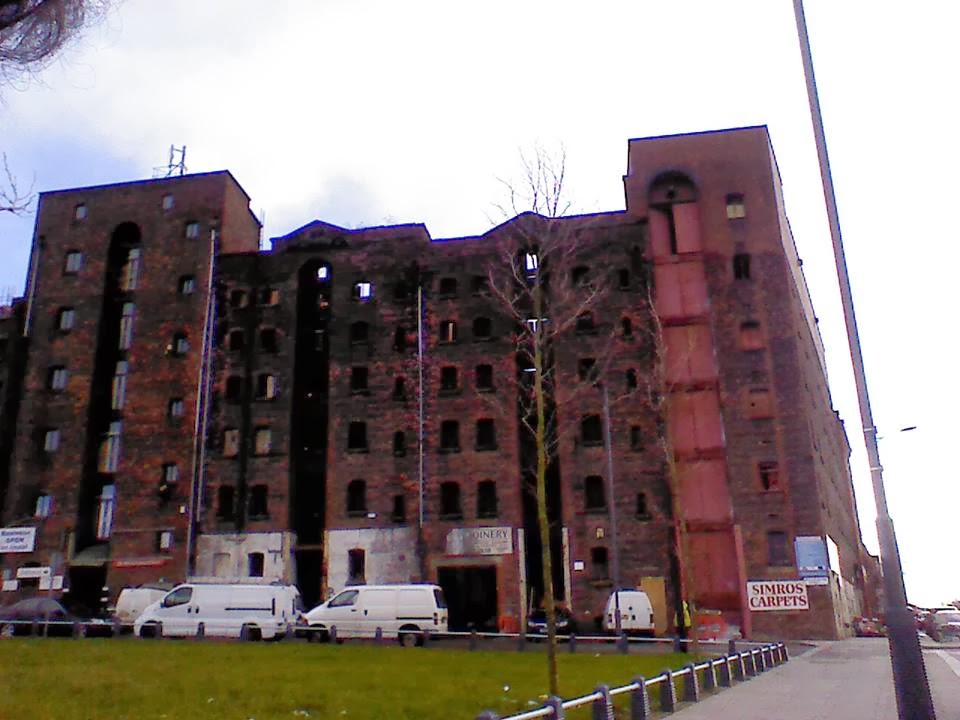 I found this antiques centre in the middle of a load of what I thought were burnt out factories, ready for demolition. In Lincoln, I'm doubtless they would have been. I'd seen these the previous day, but walking past them in daylight hours, I found the giant doors wide to the daylight, and I snook a picture of the grand insides, hundreds of metres high. The scale is impossible to describe. 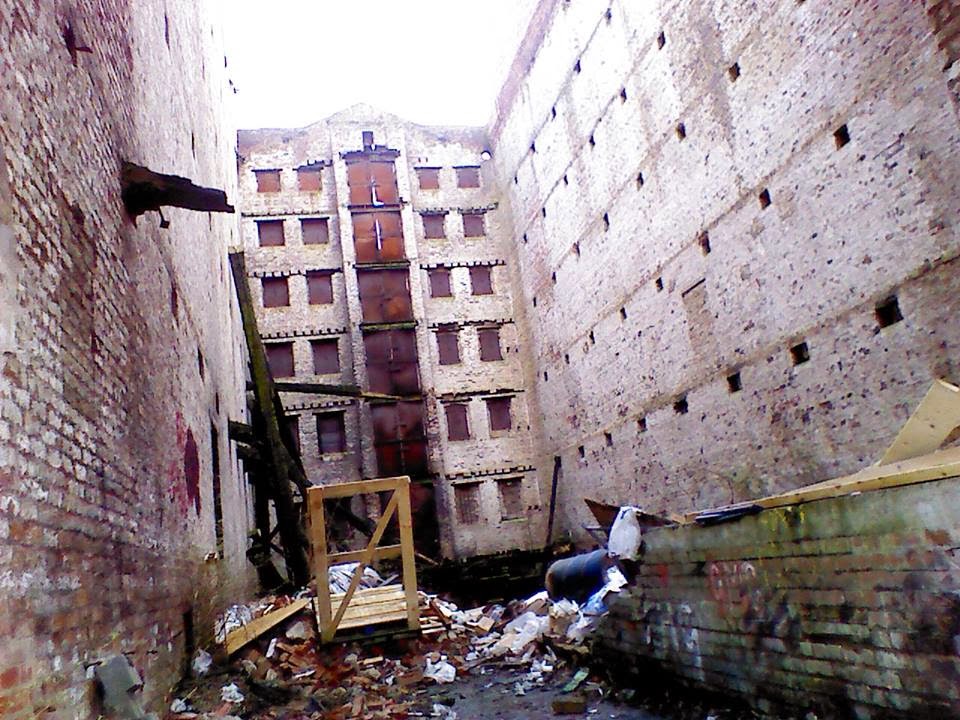 A lady then told me that these factories were being converted into housing, so that they could be useful again. My heart rose, in fact it made my day. I wish you could see the cast iron pillars rising like obelisks from the basement. Just so beautiful.

After that, I started looking around a bit more and I started to realise why Liverpool has more grade II listen buildings than ANY other city. So much is saved and preserved.

In some situations, when a building is past it, the facade and walls are kept, and the centre becomes parking, like this little theatre-type thing - it would have been flattened years ago in Lincoln to make way for a metal barrier. 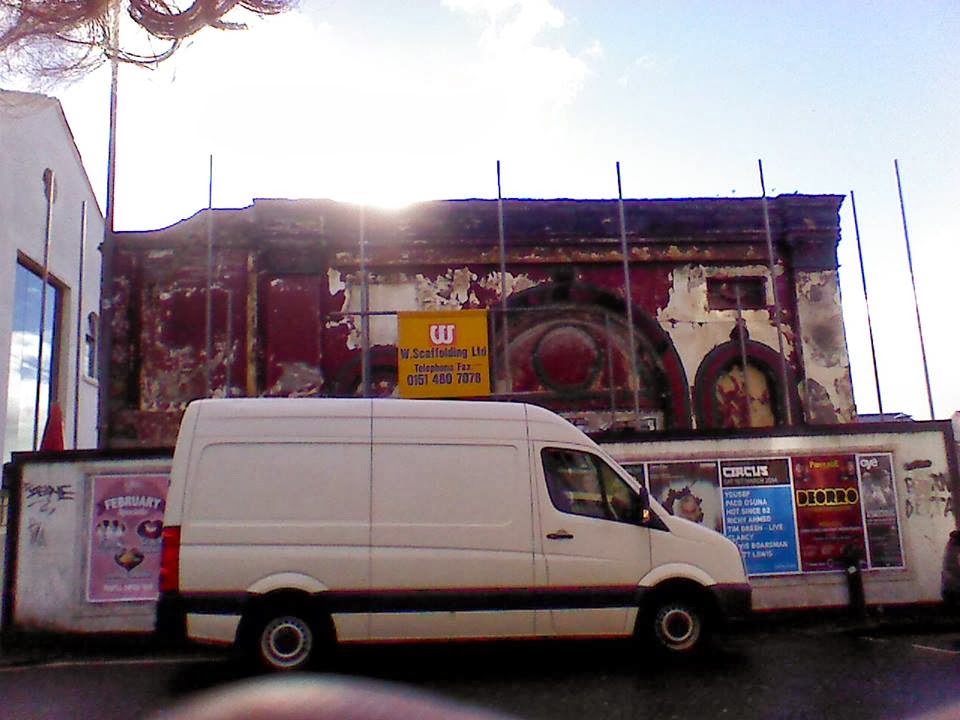 Picture doesn't show you much, but the facade is gorgeous!

Also today, I learnt first aid, and how to resuscitate people and stuff. It was really interesting, but a lot to take in. These cups of sexual frustration say it all.

Still, if you have an Angina attack... I can't remember what to do. Oh, crap. Maybe I should re-read that booklet...

On the subject of sexual frustration, I was treated to the incredibly violent sex noises of the couple in the room next door as I lay in bed, ready to snooze. I appreciate good sex, and these folks were going for it, I thought they were gonna come through the wall! I didn't want to be one of those bitter people who gets sniedy about other peoples pleasure, so I smiled and listened thoughtfully to their headboard smacking, feeling like a bit of a connoisseur. 'Well done, Sir!' I thought as he started up yet again. I didn't half get horny though.

Liz said I should have knocked on the door and asked to join in, which I thought was a sure way to get a punch in the jaw, but thinking about it, with the friendliness of the city so far, I'd probably be greeted with 'Alright mate, get stuck in!'

Posted by Sam Harrison Music at 17:51